Why Multiple Streams of Income?

You can easily see the value of having many different streams of money flowing into your life. Like a town that has more than one source of water, you are more secure if you have many sources of income. Any one of them can go dry and you'll still be okay, unlike the employee who has just his paycheck (or the town that relies on one unpredictable water source). 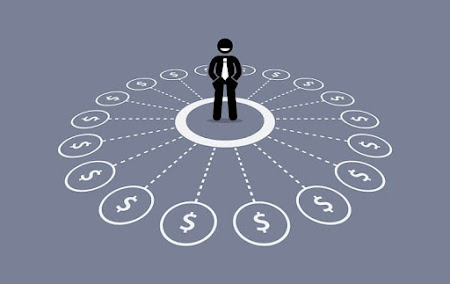 That much is easy to understand, even if you haven't yet started working on developing those multiple streams of income. But the other part of the metaphor is found in the nature of the stream itself. It flows automatically according to gravity, bringing an ever fresh supply of water. This is very different from a lake or pond, isn't it?

Imagine for a moment if you are a farmer and you had to water your fields by carrying a bucket at a time of water from a pond. There would be a severe limit to how much you could grow. There are only so many hours in a day to work, after all, and you can only carry so much.

Now imagine if you could divert a stream to irrigate your land. It would take a lot of work perhaps, to build a ditch and install the necessary equipment. But once you did that the water would come automatically, allowing you to grow much more, and freeing your time to develop other ditches and so grow other crops.

Examples of Multiple Streams Of Income

I used to play chess with an insurance salesman who was retired at 50 years old. How was he able to quit working at such a young age? By selling policies that paid him a commission every time the holder renewed them. Every year people renewed their policies and he got a percentage. He probably worked hard to get to that point, but then the income stream flowed without additional work.

At the start of 2005 I built a website on how to remove carpet stains, putting in one long hard week at the computer (I had been a carpet cleaner at one time). I mostly ignored the site in the years that followed, and still only spend less than a dozen hours a year maintaining it. Meanwhile almost $20,000 has flowed into my bank account from this site and it still comes in at the rate of more than $500 monthly.

My wife and I sold a mobile home on a lot a few years back. We are taking payments on it, which allowed the buyer to get into it more easily (he bought it as an investment and is renting it out). Selling it that way allowed us to get a higher price, and we get good interest as well. The money comes in every month. We have to renew this income stream eventually, of course, perhaps by buying another property and selling it for payments again.

I get a newsletter from a man who buys high-dividend stocks. He doesn't worry about where the prices of the stocks go from month to month, because the dividend checks just keep coming in. The work here is in the research necessary to find solid companies that are unlikely to cut their dividends. Then once you invest a chunk of money the stream flows without much additional effort (occasional research and new investments are a good idea).

Rental real estate, dividend paying stocks, secured loans, renting a room in the house, making automated websites, selling things that pay ongoing commissions, writing a book, licensing an invention for royalties - these are just some of the ways to develop multiple streams of income. A job works too, but that is perhaps the most insecure source these days. Keep the job for now, but why not start creating a few other streams of income that flow your way?