What is treasure hunting all about? It can mean different things to different treasure hunters, but the bottom line is always the search for something of value that is hidden from the general public. With that in mind, here are four of the more unusual secrets of successful treasure hunters. 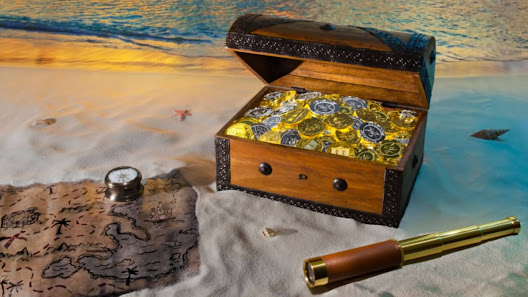 Shopping malls in the north often have an area where they dump all of the snow that is removed from the parking lot. The snow contains all the things dropped in it, ranging from coins to rings and sometimes dollar bills. All of these things are concentrated into a small area in the spring, once the snow dump melts.

A lot of part-time treasure hunters have known this secret for years. I stumbled on the idea when I walked past a melting snow pile in a Walmart parking lot and saw a necklace and five coins on the pavement at the edge of the snow pile. County snow dumps are another possible place to look into, at least the ones where snow from parking areas is dumped.

Watch an estate auction sometime. Some of the people may not be bidding for the items you see, but for what is inside these items. In the past people commonly stashed currency in their books. When such a person dies, their secret likely dies with them - nobody is aware that there is money in those books. In fact, a relative of mine found thousands of dollars in the books of a departed uncle.

Now, if a treasure hunter gets to peruse the auction items beforehand, he can check a few books, and possibly other items that might contain hidden money or valuable things. If there are a few bills or jewelry inside of books and other items, he can then bid on the lots that contain these. The book collection, for example, is often sold as a whole. Who can say many more bills will be discovered once he goes through all the books he bought.

If the storage fee isn't paid, the contents of storage units are auctioned off. Individual items might be auctioned, but it is more common to auction off the entire contents of a unit at once, or split it into several "lots" and auction each group of things. Bidders are normally allowed to check out the items before the auction.

I met a man who did just that and found that an old milk can in one lot was full of coins. At $10, his was the winning bid for the lot that included the milk can. He found a few salable items, as well as $75 in coins! He said he regularly found "treasure" at these auctions.

Treasure hunters, as well as hotel owners and room cleaners, report that money is sometimes stashed in the bibles in the dresser drawers. The cash is presumably then forgotten by the customer. Next time you check into your room, check out those bibles - and any other books that are there.

Many hotel owners also report finding men's wedding rings hidden in the rooms. This is more common in hotels that cater to business travelers. Maybe the men who are taking off their rings and hiding them before going out for the evening deserve to lose them. In any case, it makes for another interesting way to go treasure hunting - just look in anyplace a ring might be hidden.