What is residual income? Some people would say that it is easy money, and it can be eventually, but it may require quite a bit of effort up front to create streams of residual income. The important point is that this is income which continues to come in long after your work has ended. There are a number of ways to make that happen.

Here is an example from my own experience. A couple years ago I decided to make a web site about carpet stains. I bought lunch for the owner of a carpet cleaning company, in exchange for some tips on how to remove various stains, and how to care for carpet in general. I took notes, and later made them into a fifteen-page web site.

I spent a week building the site initially (I was slow then), and twice over the last couple years I have spent a few hours updating the site. I might have put as much as 50 hours into the site now, but I have left it untouched for as much as nine months at a time. In fact, as I write this, I can't remember the last time I even looked at it online. The result? It generates about $200 most months (2011 update; the site produces at least $700 per month now) from automated advertising and affiliate programs that don't require my attention. 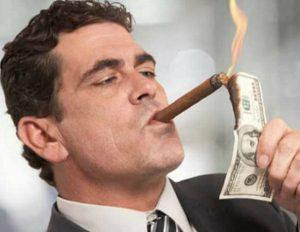 That is residual income, and you can see the advantages. I put the effort in up front, but I'm still getting paid now. If my wife and I are visiting family in Ecuador, we are still making money. We have web sites that do much better than this one, but I like this as an example, because it requires virtually no attention. How would you like to have a couple dozen web sites like that?

Other Sources Of Residual Income

Here are some of the ways that other people generate residual income. Some of these might require some attention, but if there is enough income, you can pay for someone to manage it for you, as in the first example.

Income Producing Real Estate - Buy an apartment building, put management in place, and have the cash flow deposited into your account. This is a classic form of residual income. Just be sure there is going to be enough income to cover the management fees too. This is getting harder to find in may areas, but it is crucial. Otherwise, you lose money or manage it yourself, in which case, instead of investment income, you just bought yourself another job.

Invent Things - Not an easy field to get into, but this could be a fun one. Inventors often license their inventions to companies, which means that as long as they keep selling, the originator has a stream of royalty fees coming in.

Write A Book - Traditionally, authors get about 5% of the retail price of a book. Some authors are still collecting checks from books they wrote 50 years ago. Set up a web site and sell e-books, and you can keep 90% of each sale. Nothing to ship, and if you have a processor handle the orders (that's where most of that other 10% goes), you won't have to do much more than answer an occasional e-mail.

Make Music - Musicians get royalties as long as people still want to hear their songs. Song writers do as well.

Insurance Sales - Sell a policy once, and you normally get a commission every year that the person renews. Some insurance agents retire young with a healthy stream of residual income.

Other Investments - Dividends can be considered residual income. So can income-producing stock and bond funds. If the value of the underlying investment rises, the dividend may rise too, meaning you may eventually be getting very high returns for your initial investment.