If you have some cash saved, there are options for what I call "playing with money," and which do not involve complicated businesses or boring bank accounts. Even if you do not have cash, if you have credit cards which allow cash advances, you can pay 18% interest and still make money with the money raised in that way. These are ways which mostly aren't quite a business because you can do them once or only when you feel like - they have a beginning and an end. 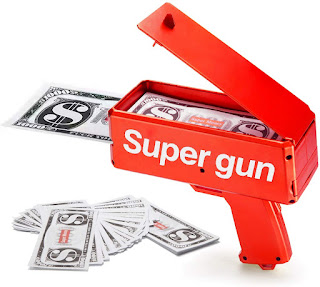 There are people that occasionally need money for a short while. A friend for example, that got a good paying job because I loaned him $300 to get drywall stilts. I never charged less than a $5 / week loan fee (don't call it interest). I haven't done this for many years now, and the legality is a question in some places. If you have any qualms, check the laws in your area and put it all in writing. Also, if you want total security, take collateral.

Investing in the Expertise of Others

My buddy John had to show me several car magazines before I understood why an old fiberglass car was a good deal at $2,300, because I know nothing about cars. He eventually convinced me to put up the money, and after a new transmission for $900, he sold the corvette for $4,300, netting us about $1,000. I took half the profit ($500) for putting up the money for the two weeks.

I've done this several times with friends that know cars but don't have cash. By the way, if I had paid 18% interest and a $50 cash advance fee to raise the money with a credit card, my profit would still have been over $400, and John did all the work. I love playing with money. Do you have any friends who know everything about boats?

We recently met a couple who buy out estates, sell some of the things at flea markets, then run the rest through auctions. They've made a living doing this for years. They load up a trailer after negotiating to buy a whole house full of stuff. Then, if they don't want to do the flea market thing, they just auction everything on Sunday afternoon for a nice profit.

If you are a good judge of value and have a regular auction nearby, you could do the same with rummage sales. Just offer $100 for everything and then auction it off piece-by-piece. The auction near us lets anyone sell their stuff, with no fee to enter. They just take a 25% commission.

Playing With the Casino's Money

I worked at a casino for years and I saw a lot of people foolishly writing down the numbers that came up on the roulette wheel. Foolishly, I say, because their their theories were nonsense. Casinos will always welcome these players and even hand them the pen and paper.

One guy, however, was actually scientific about it. By finding a bias in the wheel, after "charting" it for 5,000 spins, he made thousands betting on just one or two numbers. When a number comes up, it pays 35 to 1, but one of the numbers, because of manufacturing imperfections or whatever reason, was coming up 1 in 27 spins, instead of the average 1 in 38 spins.

So all he had to do was bet $10 a spin, and he profited $80 for every 27 spins of the wheel in the long run. That's about $100 per hour. The ups and downs are dramatic though, so this is not for the faint-hearted. In this case, I saw him lose as much as $700 in a night. Also, not all wheels have biases (they eventually replaced that wheel). So have you ever tried "card counting" in blackjack...?